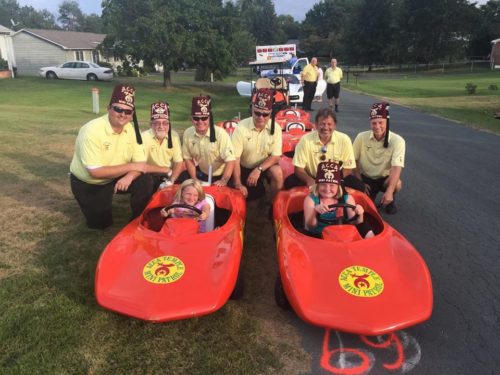 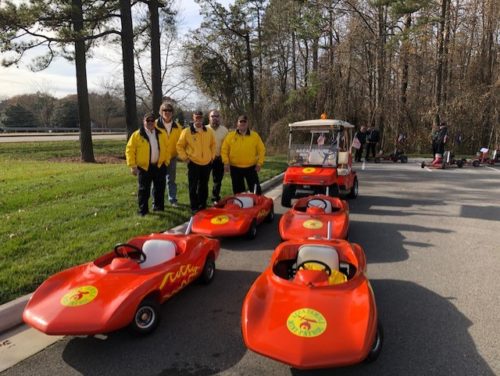 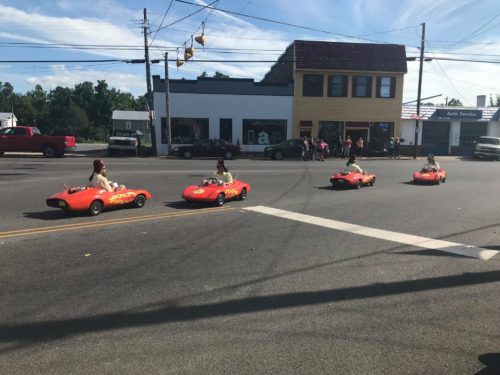 The Acca Mini Patrol has been parading since 1971. We are dedicated to supporting the Shriners Hospitals for Children — that’s why our slogan is “Mini Cars Run, So Little Legs Can Walk”. To view us in action, check out our YouTube Channel at http://www.youtube.com/user/AccaMiniPatrol.

History of the Mini Patrol

In 1971 Moon Mullins, Obie Hill and Ed McNutt, three Nobles of ACCA Temple, put together the idea of The Mini Patrol. These three Nobles arranged for the purchase of four (4)1969 Model Corvette Chevy Jr. mini cars through Hechler Chevrolet and the Rupp Dealership in Baltimore, Maryland.  These cars retailed for $559.00 each and if purchased in groups of four (4) would retail for $450.00 each.  A formal request to charter the unit was made in 1971. In 1978 the unit asked to increase the membership to 35 active members.

The Mini Patrol has performed in over 175 different cities, towns, and places over the years.  In addition to the many parades in Virginia, North Carolina and South Carolina, the unit has paraded in Montreal Canada, Atlantic City New Jersey, Washington D.C., Baltimore, MD. and all the way to New Orleans, LA. The highlight of the Mini Patrol was its trip to London, England to perform in the Lord Mayor of Westminster’s New Year’s Gala in 1992.

A total of 16 cars were purchased in Baltimore with the remaining six (6) cars coming from Virginia Tractor Company, who had obtained the Rupp Dealership in Richmond.  These cars came painted the 1969 Corvette “Hugger Orange” with bronze colored 3 HP engines.  The unit members put numbers “1” through “12” on the hood of the first 12 cars.  It was later decided to stop using numbers. Since numbers were no longer used, the Mini Patrol decided to use a personalized plate, and today they are still being used.

After about 12 parades the first year, the unit found that their cars were unable to make it up hills in some of the towns we visited. In 1972 the engines were changed to Briggs and Stratton 5 HP engines.  In 1977 the engines were chromed and in 1979 Flames were added on the sides and numbers were replaced with Mini Patrol decals on the hoods.  In 2008 many of the Briggs and Stratton engines were replaced with more powerful and responsive Honda engines.  Today, over 40 years later, many of the cars still look brand new.

When Larry Boggs and Jim Peebles joined the unit, they purchased their cars from individuals outside of the unit. So now the unit was up to a total of 24 cars.  Larry Boggs was Commander in 1985 and he referred to the Mini Patrol as the “World Famous Mini Patrol” and this description is still in use today.  The Mini Patrol is the most requested unit at the ACCA Temple.  Since the unit was chartered it has changed uniforms 4 times.

The three original charter members are no longer with us.  Ed McNutt was appointed to the Divan in 1975 and never returned to drive a car.  Moon Mullins moved to Farmville in 1977 and has not participated with the unit since 1978 and passed away in 1997.  Obie Hill continued with the unit until his death in 2005.

An additional three (3) cars were purchased in 1996 from a unit in North Carolina giving the Mini Patrol a total of 27 cars.  These cars have been passed down through individual sales from members to members over the years.  With the exception of replacing engines and other parts due to wear and tear the cars remain intact.

The Mini Patrol has been a very active unit.  In one year they participated in 53 events and the unit was in three (3) parades in one day in 1983.  The unit has been awarded over 450 trophies over the years.  On three different occasions we have donated many trophies to the handicapped to make room for more trophies. The Mini Patrol has performed with many celebrities, including  the Statler Brothers, Red Skelton, Pete Fountain, several Miss Virginia’s, race car drivers, Governors and Vice President George H. W Bush to name only a few.

Many of our members have served as Master of their lodges, High Priest of Royal Arch Chapters, District Deputy Grand Masters, as well as officers in other organizations.  The unit has produced four (4) Potentates; Ill. Sir Edwin O. McNutt in 1983, Ill Sir Clarence C Boggs in 1993, Ill Sir L. Lee Bradshaw, Jr. in 1994 and James A. McAllister in 2000.  The Mini Patrol is proud to have the Grand Master of Masons in Virginia for 2009, Most Worshipful Jeffery E. Hodges.  We have the Right Worshipful Reese E. Carroll who is currently serving as the Deputy Grand Master. The Mini Patrol has two members of the Board of Governors of the Greenville Hospital and both are Emeritus members and they are James A. McAllister and his father Frank B. McAllister. We also have an Associate member of the board Richard Redman.  Members of the Mini Patrol have served many Potentates as Chief Aide, Personal Aide, Assistant Chief Aide, Chairman of the Decorating Committee, Shrine Center Board of Trustees, member of the Uniform Council and many other positions in the ACCA Shrine Center.

In addition to having a lot of fun, Mini Patrol members work hard to raise money for the Shrine Hospital and the Transportation Fund.  Fundraisers include parking cars for the Montpelier Wine Festival, Orange County Wine, Wings and Wheels, driving for the Motley Richmond  Auto Auctions, Selling tickets for the Richmond Raceway, and a spring and fall stew, just to name a few.

The unit is very family oriented and our Ladies are an important part of the Mini Patrol.  We have many family socials each year.  Members and drivers have changed, but the sprit, dedication and desire to help others is still the same.  On any given day if there is a function at the Shrine Center you will find members of the Mini Patrol participating.  They can always be depended on to be part of the activities. Almost every kid and adult who has ever seen one in a parade says in excitement “HERE COME THOSE LITTLE ORANGE CARS”!  We are members of the acclaimed ACCA MINI PATROL and are proud of our history, popularity and our mission.  “Mini Cars Run, So Little Legs Can Walk”

(The history was updated  by Leslie L. Bradshaw,Jr. in  November 2012 with information from the August-September Accalette 1997 and an article written by Obie Hill in 2002)