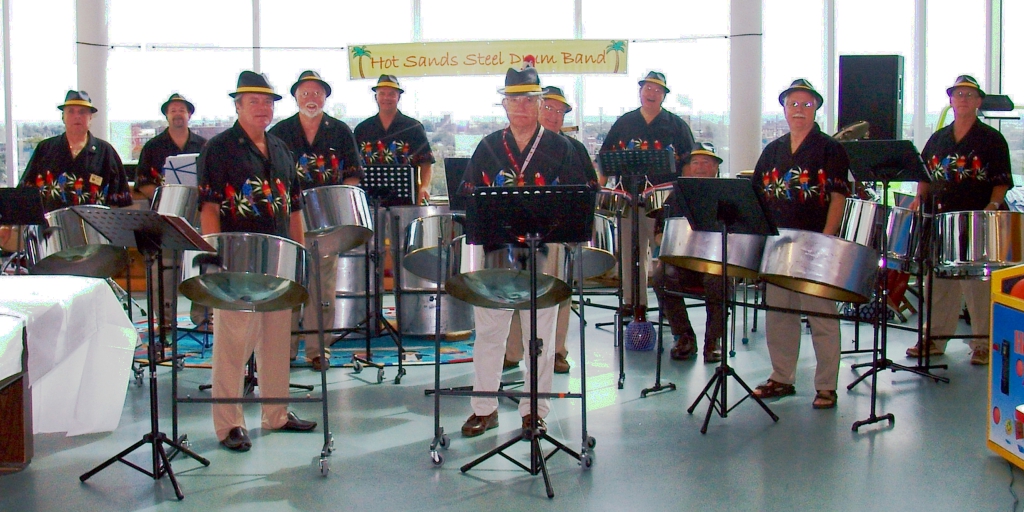 ABOUT THE BAND
The Hot Sands Steel Drum Band was organized in 2006 by Ray Goodwin and Jim Beamguard after they returned from a Caribbean cruise. They were so inspired by the captivating island music they had heard from the steel drums, they began organizing a similar band at Acca.

The band plays a variety of up-tempo music ranging from calypso/Island tunes to popular music, and even including some country songs. Our influences stem from Jimmy Buffet, Harry Belafonte, Brad Shores, Shelly Irvine, Santana, and Kyle Dunleavy. Since its inception, the band has grown in number of members as well as talent. Originally established with nine members, the band has a current membership of twelve.

The Hot Sands Band has had the opportunity to perform in two Imperial parades, one in Baltimore, Maryland, and the other in Charlotte, North Carolina. The band was invited to play at the 80 year Anniversary Celebration of the Philadelphia Shriners Hospital for Children, and has performed on the Grand Strand of Myrtle Beach, South Carolina.

The band can frequently be seen performing in the Charlottesville Dogwood parade, the Colonial Beach parade, the Acca Shrine Center at the Spring & Fall Open House nights, and at the Sounds of Acca.

The band enjoys presenting enthusiastic performances for its audiences, and they have fun presenting their unique sound to anyone who will listen. If you are interested in having the band perform for your event, contact us at hotsands@gmail.com, or call Rusty Brinkley at 804-350-1396.

We are always looking for persons who would be interested in joining the band. You do not need any musical experience, just the desire to have fun. We normally practice Thursday evenings in the Activity Center at Acca Shine Center. If interested, call Rusty Brinkley at 804-350-1396.