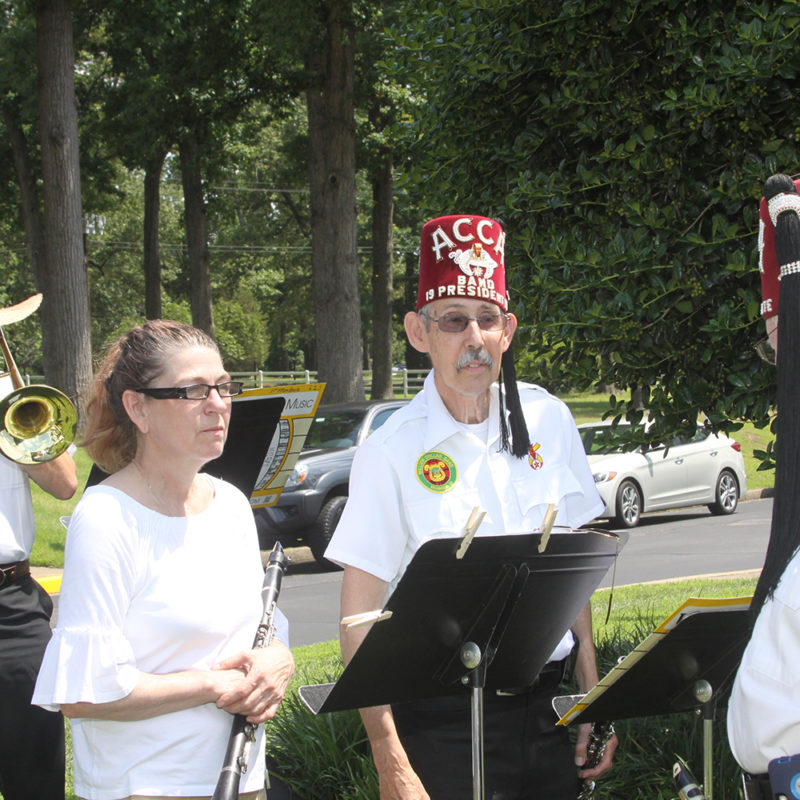 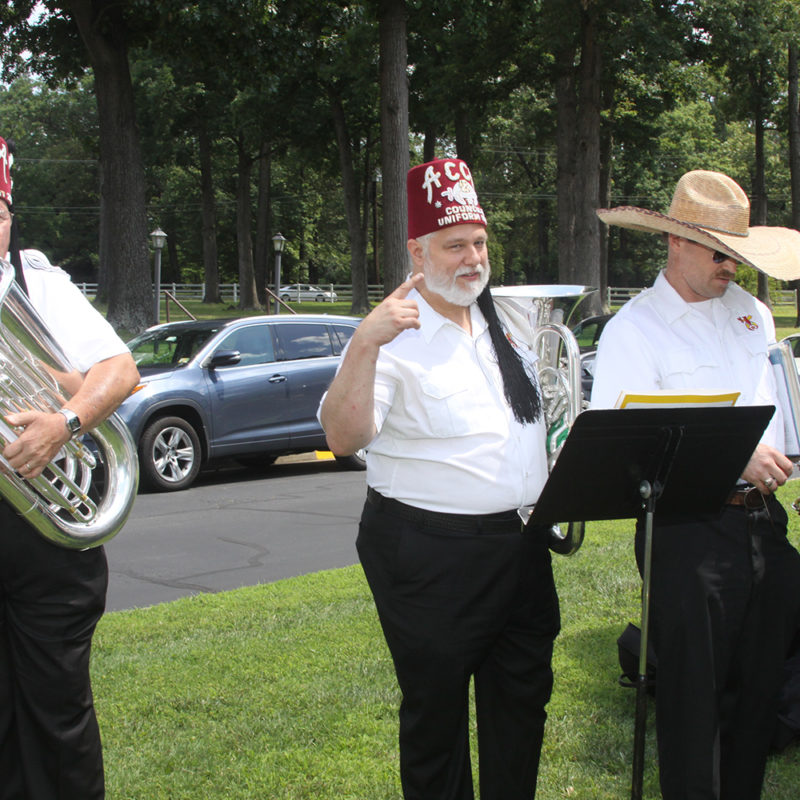 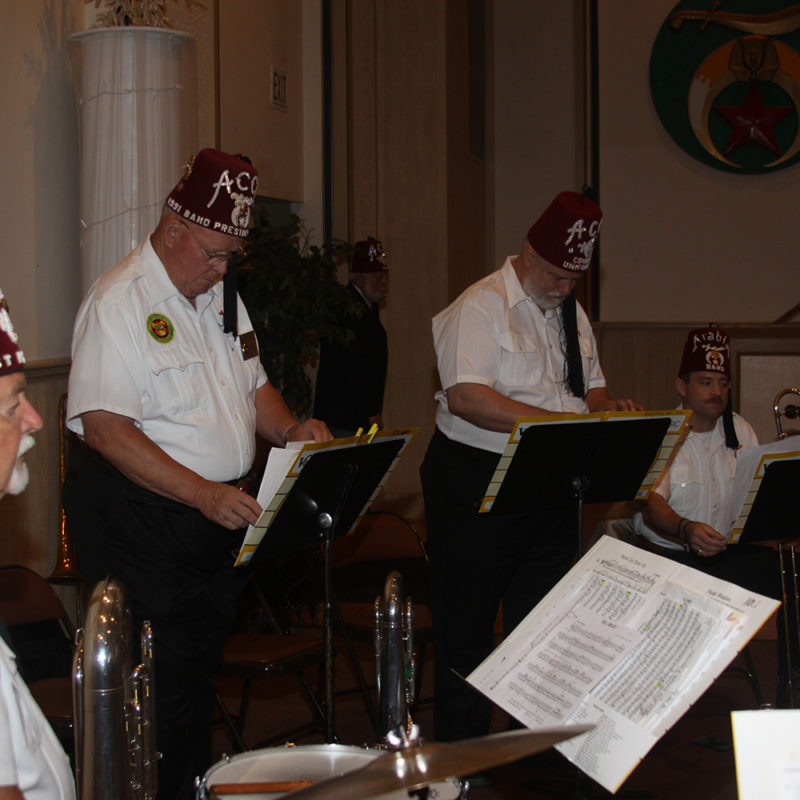 The ACCA Temple Band is the oldest continuously organized unit in ACCA Temple, and ten (10) of its members have been elected Potentate of ACCA Temple. For the past ninety-nine (99) years the Band has provided stirring and enthusiastic melodies while accompanying the Nobility on trips in and out of the State, including Imperial pilgrimages and in addition, the Band has played for all Temple Ceremonials and many concerts throughout the length and breadth of ACCA’s domain.

The thought of a musical unit for ACCA Temple arose during the return trip of the Nobility from Atlanta, Georgia following the Imperial Council Session in May 1914. Steps along that line were immediately taken. The late Noble G. Burton Mountcastle was given the authority to organize a Drum and Bugle Corps progressed rapidly considering the fact that few, if any, of those who volunteered had ever blown a horn or beat a drum.

The Drum and Bugle Corps continued until December 19, 1914, at which time the Band was organized. It consisted of Noble Mountcastle as Director and sixteen (16) other Nobles of ACCA Temple. The Band remained under the command of the Patrol until August 2, 1915 when a resolution was presented to the Potentate G. Jeter Jones requesting that the Band be declared a separate unit from the Patrol. The resolution was unanimously adopted and Noble Mountcastle was appointed the Director with authority to organize the Band and expand its functions. Effective as of August 6, 1915 each member of the Band resigned from the Patrol and the Band was on its way. At the first election of Officers Noble G. Jeter Jones was elected as its first President. The organization was rather unique by reason of that only three (3) of its members knew anything about music and the remainder had to be instructed by the Director in both music and instruments.

The Band accompanied the Patrol to the Imperial Council Session, Seattle, Washington in July 1915. This was the first parade in which the newly formed ACCA Temple Band participated (The Band has an action photograph of the Band in its history collection to include others).

Since its organization the Band has been very fortunate of having capable Directors lead the Band, men who know music and have made music a part of their careers. Such as, the late Noble G. Burton Mountcastle (1914-with some years of interruption until 1936), the late Joe Bereton (1916-1923), the late Harry Ryder (1923-1927), the late J. Donahue (1936-1943), the late Noble Ernest Carr (1943-1961), the late Noble Wes Shipe (1961-1975), the late Noble Robert (Bob) Post (1975-1992) whose motto was “a strong introduction and ending, the middle will take of itself”, the late Noble John Carter (1992-2001), and Noble Harry Seeley (2001-2010). Currently (2010- 2014) the Band is under the direction of Ill. Sir Phil Johnson, P.P. serving as “ Director”, with Nobles John Stenstrom as the “Assistant Director”. They were and still are a wonderful bunch of fellows and Shriners, hard working and the ACCA Temple Band of today is the results of the Bull-Dog tenacity displayed by the Nobles who were charter and first members. The Band has had ten (10) Directors, all of whom had their own way of getting the job done and fifty-two (52) Presidents, of which eight (8) moved on to become Potentates of ACCA.

The ACCA Temple Band has had a very interesting past and its members strive to make the future even better. The past can be confirmed by the many trophies, letters, and placards of appreciation, and other awards from the many events in which the Band was a part. The Band is extremely proud of the trophy received from the South Atlantic Shrine Association (SASA) in September 1974 after being selected as the Number 1 Band at the convention, including the parade.

From the beginning the Band was a marching unit of ACCA Temple. Over the years members came and departed (mostly from deaths and health) for various reasons. In 1990 when Horace H. “Sam” Faudree was President, he envisioned the Band becoming a “Riding Band”. Since that year the Band has been riding on a forty (40) foot flat-bed trailer, decorated with different themes depending on the type of parade. In 2007 the Band purchased an old “school bus” and is currently in the process of designing an “appealing look” (as of January 2010 job still not complete) that will make the Band proud in upcoming parades. In 2010 the Band sold the Bus as it was too expensive to maintain. Subsequently the Band is utilizing a trailer furnished by Noble Robert Llewellyn and pulled by his personal vehicle in events in which the Band participates. The latest creation on the trailer is that of a “Pirate Ship” proudly displaying the “Skull and Bone” and “ACCA Band” flags with Cannons protruding from each side of the ship. Of course there is a “Look-out” up on the front deck with a hardy “Captain Pirate” at the helm on the stern.

Each year the Band either host or participates in various fund raising event to raise money to support Shriners Hospitals for Children and the Transportation Fund of ACCA Temple. In recent years the Band has played four (4) concerts in conjunction with the Lancaster High School Band. One (1) in the fall at their school to help raise money to make their trip to London, England for the New Year’s celebration in 2005. Also the Band has played two (2) concerts in conjunction with the Manchester High School Band in 2009 and 2010. In 2009, 2010, 2011 and 2012 the Band played with the Northumberland High School Band to help them dedicate their new high school and raise funds for their complex in Heathsville, Va..

The future is bright for “The ACCA Temple Band”. It started off with our own Band room neatly decorated and furnished by the Band’s members, still in search of new members from the Temple Ceremonials and we welcome more to join our musical contingent. We are in the midst of planning for new uniforms and the future of the Band.

This is your ACCA Temple Million Dollar Band. It is considered one of the finest in all Shrinedom!!!!!!